Fishing in Tunisia between world heritage and innovation

The European continent is one of the most important markets for the dissemination and promotion of fish, and European companies are easily able to gain access to fishing licences in waters bordering the continent, as is the case in the Mediterranean and off West Africa. However, industrialised, massive and often illegal fishing techniques are threatening the livelihoods of people on the southern Mediterranean coast, causing traditional community fishing to disappear as a result of new commercial and industrialised processes that are in danger of becoming a threat to developing countries.

The result and the international attention achieved is the result of a close collaboration between the Tunisian National Heritage Institute (Inp) and Webport (the digital port of the Mediterranean conceived and curated by Ciheam Bari as part of the Nemo project, launched in 2014 with the support of the Italian Agency for Development Cooperation and in collaboration with the Ministries of Agriculture and Fisheries of Lebanon , Egypt, Tunisia, Algeria, Morocco), for the rediscovery and enhancement of Tunisian society and traditions that draw international attention to local fishing and employment opportunities for Tunisian fishermen.

In the North African country, initiatives for local cooperation of artisanal fishermen are currently spreading, committed to using traditional fishing methods and integrating fishing with agriculture, also taking care of local vegetation and enhancing indigenous agricultural traditions. Some of these projects are supported by the Lighthouse Foundation that promotes science and research, teaching, culture, the principles of ecology and international development to protect and monitor the world’s seas and oceans, with the intuition that the current uncontrolled development of humanity will generate many social and environmental problems. The Foundation pays attention to the message launched by the first and second Rio Conferences and the Sustainable Development Goals of the 2030 Agenda that humanity has decided to undertake. A clear message that aims to strengthen the local work of those communities that want to strengthen the resilience of the territories and undertake new perspectives of enhancement and protection of the sea.  Sustainability and cooperation become an initiative and proposal for Tunisian local authorities that want to boost employment while preserving the territory.

Strengthening cross-border cooperation in the maritime field and supporting good neighbourly practices between Tunisia and the regions of southern Italy can be a further building point for the development of sustainable employment for the countries of the South. In the North African country, the fishing industry employs about 100,000 people and accounts for nearly 10% of the nation’s agri-food exports. The modernisation of the fisheries, aquaculture and rehabilitation of the port of Kelibia are priorities that the Government of Tunis wants to address in a climate of cooperation with Italy.

An extremely interesting project is the one launched by the Prasoc Programme, for the implementation of a credit line of EUR 57 million, of which EUR 50 million is on aid credit and EUR 7 million per gift, which is dedicated to the agricultural, fisheries and social and solidarity sectors. This initiative is the first joint credit operation between the Italian Cooperation and the Cassa Depositi e Prestiti that will contribute own funds to the implementation of the initiative and was recently described during a webinar, organized by the WestMed Initiative platform, with the Italian Agency for Development Cooperation in Tunis, the Delegation of the European Union in Tunisia and the Italian Embassy in Tunisia , with the participation of Ambassador Lorenzo Fanara, on the theme “Agriculture and Fisheries”. Among the most innovative projects recently launched we find SUREFISH, winner of the PRIMA Observatory on Innovation call, which sees partners from five countries working together: Italy, Egypt, Lebanon, Spain and Tunisia with the coordination of Italy by ENCO SRL and the University of Naples Federico II.  The Tunisian partners working on the project are Didon Marée Sarl, Institut National des Sciences et Technologies de la Mer – I.N.S.T.M and Slow Food Tebourba Association together with Gi.&Me. Association, chaired by engineer Franz Martinelli.

Strengthening cross-border cooperation in the maritime field and supporting good neighbourly practices between Tunisia and the regions of southern Italy can be a further building point for the development of sustainable employment for the countries of the South. In the North African country, the fishing industry employs about 100,000 people and accounts for nearly 10% of the nation’s agri-food exports. The modernisation of the fisheries, aquaculture and rehabilitation of the port of Kelibia are priorities that the Government of Tunis wants to address in a climate of cooperation with Italy.

The aim of the project is to enhance the Mediterranean fish heritage, through the monitoring and analysis of the traceability, sustainability and authenticity of fish caught throughout the Mediterranean. A synergy between local associations, companies and fishermen that makes use of the most innovative technologies and skills on ICT, blockchain, labelling and intelligent packaging, using innovative sensory tools for the traceability and evaluation of fisheries. In addition, the project aims to develop communication and information strategies to promote consumer confidence, with certification marks, the development of IT applications, to protect endangered species in the Mediterranean and to share research data with all the actors involved. A project that in Tunisia sees the protagonism of local communities and fishermen’s families. The sustainable development of the Mediterranean and the countries on the southern shore of our basin requires long-term action and a multidisciplinary approach that looks at the enhancement of the territory not in terms of pure exploitation but by analyzing the opportunities and the use of sustainable and regulated approaches of marine resources. 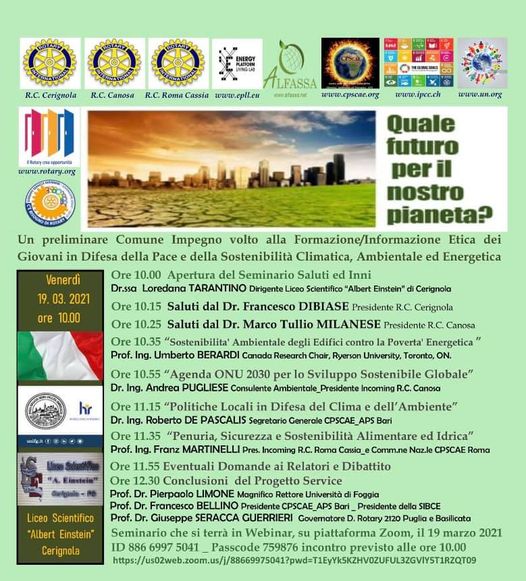 What future for our planet? A

Leave a CommentYour email address will not be published. Cancel reply